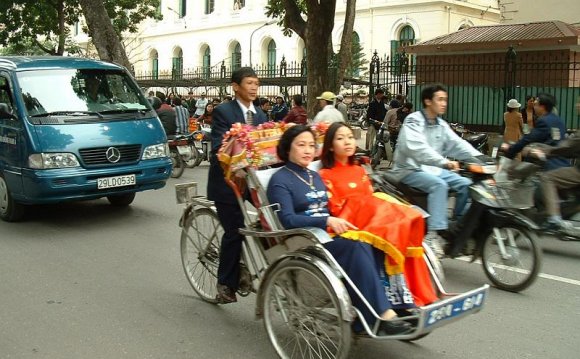 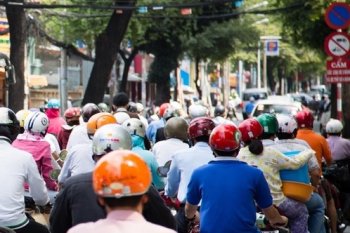 When travelers return from a Vietnam tour, they tell us about the amazing things they saw, food they ate, and mostly, the friendly people they met. Vietnam is a very safe place to travel. As with all tourist destinations, however, there are a few people that will try to take advantage of travelers. In Vietnam, the majority of these swindles are related to transport. Here is your guide on how to avoid transport scams in Vietnam, to ensure you have the best possible experience of Vietnam.

Taxis are a very economical way to travel in Vietnam. Textbook scams range from simply being short-changed, to more serious instances where passengers have been taken outside of the city with drivers demanding money to take them back. While the latter is extremely rare, it is wise to be aware.

The ever frenetic streets of Hanoi where taxis are plentiful

Choose well-known taxi companies. This is the easiest way to avoid taxi scams and we recommend always using a recognized brand of taxi. Those individuals perpetrating the more serious scams are usually not real taxi drivers and are easily spotted. Mai Linh is a reputable taxi company that can be found throughout the country. In Saigon we also recommend Vinosun and in Hanoi, Hanoi Taxi. If you are not sure, you can ask your hotel to call you a taxi.

Always ask for the driver to use the meter. If the driver says the meter is broken, get out and use another taxi. When you get in, there should be a small starting fare, make sure you know what it is, and that the last passengers fare is not still on the meter. Taxis should cost around 15, 000VND (0.75USD) for 1km and are measured in thousands, so if the meter reads 49, this means the cost is 49, 000VND. The fare is never per person. Occasionally a less reputable taxi driver can alter the meter. If the fare is climbing too quickly, get out and take another taxi. A taxi around town should cost between USD and USD. Twenty US dollars should get you to the next town, so a journey within the city should never cost that much. 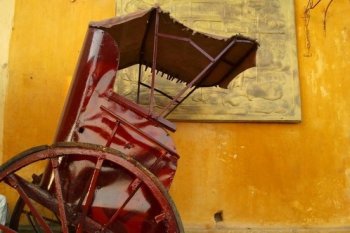 Have a rough number in mind

Have an idea before you travel how much the trip should cost. Tour leaders or hotel bellmen will be able to give you an idea. Don’t ask the taxi driver, or they will see that you don’t know and may take you the long way. If traveling to the airport in Hanoi, read the stickers on the door that give fixed prices which are cheaper than the metered fare. Make sure the driver understands your destination clearly - hotel cards are a great way to avoid a misunderstanding.

To the hotel, please

Ask to be dropped right in front of your hotel, so if there is a problem, hotel staff can help. When paying your fare at the end, get to know which note is which and never ask the taxi driver to take the money out of your wallet for you. When splitting a cab, one person should pay the driver and sort out payment from the others later, to avoid any confusion over how much is being paid to the driver.

If you are traveling from the airport to your hotel, a taxi driver may try and get you to stay at a hotel where he earns commission instead. If you are told your hotel is closed for renovation, over booked, on fire or anything else along those lines, it’s not true. Insist you have a booking which has already been paid for.

Cyclos and Motos (or Xe Om)

The great Vietnamese cyclo. A French import, it remains a great way to get about and soak up the atmosphere

It is generally less hassle to get a regular taxi but if you want to try the local transport, the cost will depend on the willingness of the driver and your negotiating skills. It is essential that you agree on a fixed price before starting your journey. Check if the price is total or per person and always assume it is one way. Cyclo journeys for one hour should not cost more than about 80, 000VND ($4USD), no matter where in Vietnam you are. A moto, or motorcycle taxi, known locally as a Xe Om should cost about half what a taxi would cost. Do not pay until you get to your destination. If the driver disagrees at the end of a journey, leave the money on the seat and walk away.

In places like the Mekong Delta and other riverside towns, boats are the perfect way to explore the local area. Local ferries have set prices which are very inexpensive. Short tours of rivers such as the Thu Bon in Hoi An and the Perfume River in Hue are negotiated using the same principles as Cyclos and Xe Oms.On rare occasions there have been reports of tourists being told the price had increased whilst inthe middle of the river. To avoid this, get a recommendation for a boat operator, book a tour before you leave North America and if possible travel in a group.

Generally, traveling though Vietnam is safe and hassle-free with a wide range of transport options to choose from. Book your tickets ahead, and other than being asked for an “extra tip”, you should have no problems.

This is how they transport dead cows in Vietnam